The moulting period is one of the most important periods of the year. 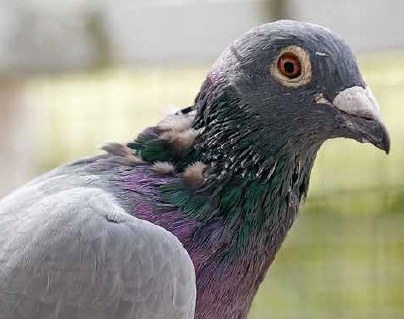 For many fans, it's a time when they remove their gaze from the pigeons and spend more time with the family and other priorities. For example, a well-deserved vacation. That is of course understandable, especially when the performance is disappointing during the racing season. In that cause, for a while, It is often difficult to raise the motivation to give all necessary attention to the pigeons precisely in this period. Yet this is more than important. Underestimating the importance of moulting, is the prelude to disappointment in the next year. The spring work quality also depends on the care given to the pigeons during moulting. Good nutrition, regular bath and plenty of air and light (aviary) in this period of great importance. Furthermore, one can in these months often provide a good mineral mix to shortages - in whatever form - to stay. The pigeons can search it and find what they need instinctively. Especially in the moulting period, it is important to provide sufficient minerals.

In the moulting period, there is a high to very high metabolic activity. The liver works on power to the materials needed for the new springs, to provide sufficiently to where they are needed. During this period, the liver should be well supported. Stress should be avoided. It should be a period of rest. Only in this way you can lay a good foundation for the upcoming racing season.

To help the body get rid of old slags, I recommend, for years at the beginning of moulting, an old-fashioned tea cure with Molting seeds. It does take some effort to draw some fresh tea every day, but they also get something in return. For the cost you do not have to leave it. It is often the motivation that, as mentioned, is missing in order to do this. Also supportive for the cleaning of the liver are the various Chol (ine) products, such as Sedochol, Bonichol, Biochol and so on. These products also typically contain additional methionine and lysine and sometimes artichoke extract. In the moulting period, we recommend more often to give B.M.T from the basic package. Besides the fibers that help the bowel cleansing, it also contains proteins, inter alia, sulfur amino acids, vitamins, minerals and trace elements, and finally probiotics. All substances which during moulting may need an increased exist to.

In this period, it is also important to use as little medicine as possible. Medications are, in principle, foreign substances, which must be detoxified and removed from the body. This alone is reason enough to see them off at this time, unless there is no alternative. Sick birds moult badly. Subject to the individual animals, treat the animals that suffer from it, therefore individually, to prevent unnecessary treatments from healthy pigeons. Routine Spa Parties are unacceptable. If one's business is handled properly, before the moult they have commissioned an audit by a pigeon doctor to see if there are any home, garden and kitchen diseases - trichomonads, coccidiosis, worms and external parasites - are present. This can then, if necessary, be addressed in a timely manner.
Is a cancer infection established with the youngsters, it should be treated after the last races or as soon as possible otherwise. The youngsters indeed shortly after the last flights get in the moult and medication during the moult is undesirable.

Several medications do provide some drawing pins. This may indicate that the pins in those places are not formed optimally. Notorious in this is the anthelmintic mebendazole, which may cause even deformed pins. But dimetridazole could have used some of it. Is there at this time unexpectedly been strong coccidios infection, then the event is chosen as a medicine, the best choice for a few days is Toltrazuril. Sulfa drugs, although some exceptions, have only a limited effect against coccidian, but they can better not be provided during the moulting for their impact on the springs. The places where the drawing occurs in the spring, are usually the weak points of the springs and advance places for spring breakage. Moreover, not only medication can give drawing pins. It can also occur in disease and an undersized power supply.

Providing pre- and probiotics is a wise choice in the moulting period. This one supports the intestines, making this work better and the immune device - more or less – is spared. The probiotics will make it the pathogenic bacteria more difficult to gain the upper hand. This way the body can more quickly get through this ever-present threat. Because the body gets no help in this period against various pathogens – and they are always lurking - the defence system remains alert. This training of the defence system is not a luxury. This is why I try as much as possible, to communicate for the youngsters from the deposition and minimize medication. What is important here is that the birds have the opportunity to fight the pathogens themselves. Thus, a maximum support of the immune system in a natural way. Over the years I have developed a variety of products for this purpose that are often coordinated. If lovers come during the season that they want to try out the system, I usually refer them to the end of the season.

Beginning with a natural approach is not a packet of instant pudding. Natural approach is also another way of thinking and one has to make their own. One should be aware of the needs of animals, and above all to ensure that the animals do not get sick. Too, one assumes that it is a matter of ongoing process. For pigeons that is, to a great extent, so. The body itself is its best healer. If it gets given the right opportunities, the body solves the problems itself.
But with today's top sports pigeons, more and more hitches in the domestic capabilities of the pigeon's body to the problems remain the boss. Which features we want to give the bird through a natural support. If we do not, we are doomed to keep running with drug jars behind the pigeons - as has become in recent decades commonplace. More and more enthusiasts and doctors are beginning to see that we have much more proactive in preventing disease in pigeons. I call this for over thirty years. But when it was customary to solve each trifle with antibiotics, call especially on deaf ears. Meanwhile, many physicians changed perforce of view. Simply because the government sees overuse of antibiotics as completely as undesirable and acts accordingly. 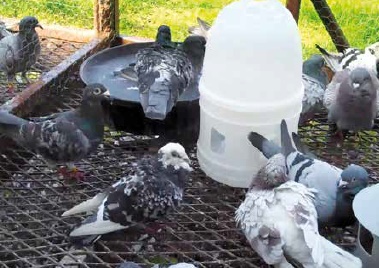 But whatever the reason may be, this cover - which now postvat other physicians -, the sport is ultimately served by it. We must get rid of the situations in the lofts where the birds only with frequent use of antibiotics seem even apparently healthy. Yet these are usually weak brethren equivalent fall by the wayside when they come to a loft with a more natural approach, which has resulted in a healthier and stronger pigeon strain. Often these birds disappeared after a few months - because they simply can not manage.
The object of the approach is, of course, the pigeons in times of decreased resistance to give sufficient impact force, so that again is not equal to antibiotics is used. The moult eminently such a period of time due to the additional energy that is required for the production of the new plumage.
For a good start with a natural approach, we have a number, assembled products matched. This is the Bony Basic package. In principle with this it is possible to provide optimum support for the pigeons in a natural way. This package is customizable to your needs, so that the optimal course guidance system can be set up for their own loft. No two lofts are the same, the circumstances biting each loft again are slightly different, so the emphasis should also be slightly different. When setting up a health guidance system is customized a motto.

If we go back to the story about the moult, it is now clear that supporting the liver, is not only as an organ for detoxification, but also as a producer of building materials for the feathers, is of great importance. In addition to naturally rest and avoiding stress. If we consider that especially sulfur-containing amino acids are important for the production of springs, it is also clear that these should be available to a large extent. That goes for all amino acids. Amino acids are the building blocks of the proteins are required in the production of the feathers. It is therefore wise to provide proteins with a high biological value and easy digestibility. If one is running too many proteins during the season with a poor digestibility, then one can, which is often identified by the blue color of the breast meat. The liver then asks for too much blood, and takes all the oxygen from the blood to use for indigestion.

In this period, in addition to amino acids, the supply of adequate nucleotides, is also desired. Nucleotides are the building blocks of the genetic material. During the growth and moult a lot of new cells are created. If these blocks are more than sufficiently available, it makes it easier for the body. Critics sometimes say that this is unnecessary, because the body can produce these chemicals all yourself. That's right. But here we talk about how we should act optimally in order to obtain an optimal moulting, which the top athletes need among our pigeons.

What can we do more so that healthy birds get through the moult as well as possible?

In addition to an adequate supply of sulfur-containing amino acids and amino acids with a high biological value, is an additional gift of biotin (vitamin H) in place. Together with the vitamins from the B-group, these vitamins perform an important function in the formation of the new plumage. Brewer's yeast, baker's yeast and products such as B.M.T. contain a large extent vitamins from the B group. Brewer's yeast is regarded as one of the best producers of the B-group. In addition, vitamin A, D and E is also needed. It is particularly important that it is adequately zinc in the rich supply of minerals and trace elements.

It is also wise in shedding to ensure adequate intake of unsaturated fatty acids. Many moulting mixture contains enough seeds with unsaturated fatty acids such as flaxseed, rapeseed and canola. When in doubt, it is always an oil mixture with enough omega 3 and 6 oil on the food display. And also some extra wheat germ oil, in a natural way, to add vitamin E. Many artificial vitamin E contains only one type of tocopherol. As a result, there may be a shortage of the other tocopherols. Due to a natural source of vitamin E to be used, one does not have this problem because a natural source usually contains the entire pallet vitamin E.
The statement "with healthy and well food the pigeons get enough nutrients inside," I would not have too much confidence in the moulting period. Moulting will surely optical be a normal course, the question remains whether the moult is optimal.

As a fancier, at this time make a significant contribution to achieving performance in the following year.

That if there is a 'R' in the month, it is better not to give a cure in the drinking-water?